This post concludes the recent series studying Hebrew and Aramaic loan-words in various documents that are commonly referred to as gospels, whether inside or outside the New Testament. I approach the study of these documents as an exercise in data analysis, employing computerized methodology whenever possible to give the most objective results that I can manage.

Use of Hebrew or Aramaic Loan Words

The chart below summarizes the total occurrences of Hebrew or Aramaic loan words that I was able to discover in these gospels. Within that total count, there is also a breakdown of how often such words were used in phrases attributed to Jesus by the author ("red letter" usage, based on the typographical convention of some texts that use red letters to show Jesus' words). Currently, full phrases such as Jesus' cry from the cross are counted as a single use in this chart. 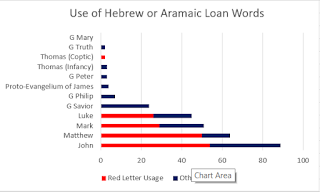 This second chart shows the number of distinct words or sayings from those languages contained in each document. 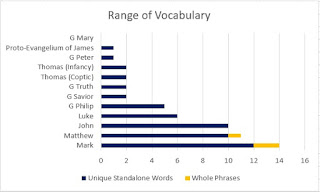 The results range again from the Gospel of Mary on the low end, where I was not able to find any Hebrew or Aramaic usage in the surviving text, to the Gospel of Mark on the high end with the highest number of unique and distinct words. Again, whole phrases in the underlying languages (one such phrase in Matthew, two phrases in Mark) are currently counted as single items. For methodology, it would ultimately be cleaner to break those phrases into their underlying words, as an open item for further work.

Comparing the charts to each other brings out some interesting points about individual documents:
References - Links to Underlying Word Studies
The summary charts are based directly on totals from the material in the linked documents.

Posted by Weekend Fisher at 8:37 PM

This is excellent research. This needs to be published. Can you work this material into an article?

Hoping for a Revival