Loving the world: as I love myself

There is a real sense in which our calling, as Christians, is to love the world. When God saved the world, we are told that his motive was not duty or obligation, but love. The ability to see us as we were meant to be is love; the inability to see someone in that light is a lack of love. "Love is blind" is not quite right; love has the ability to see the possible, to connect us. Ultimately we become more like whoever shares that connection with us.

In all the stories about superheroes and supervillains, the two groups have comparable abilities; the difference between a hero and a villain is a matter of heart. The meaningful difference is not their prowess but their kindness. Our participation in saving the world is by loving the world. So where can I start?

"Love your neighbor as yourselves." For that to be true, there must be legitimate self-love: not fawning self-absorption, nor a cold and clinical duty to self. I picture a grounded warmth in the heart, and a willing commitment to our own well-being, our own inclusion, our own consideration in matters that affect us. For us to be able to "love our neighbors as ourselves" requires first that we love ourselves: that we put aside any fawning or coldness or self-directed harshness and instead love in a meaningful way, with a consideration we would be glad to receive from others. It is the ground on which I can meet others; if I have not formed the right heart toward myself then I will not be able to do form it toward others.

Once I am grounded in love as God intends, I can love the world one neighbor at a time.

I believe it would be tone-deaf and inappropriate for me to choose this particular moment to resume my prior series; that kind of thing in its own time. This post, in its way, intends to engage current events with a Christian response.

Before I have written at length on how the faithful cultivate a heart like God's and pursue actions like God's in their humility, loving kindness, and goodwill. (Series index.) In that light, I'd like to consider one phrase: "For God so loved the world." It's easy to think of "the world" in the sense of "worldliness" as in the well-known hymn, "What is the world to me?" which reflects on the vanities that we do well to avoid. By itself, though, it is incomplete for a Christian to picture the world only in terms of its vanities. "For God so loved the world." For all its messiness, for all its heartaches and troubles, God loves the world.

What is the world to me?

Risks for this week: Eyes open, calm, and standing absolutely firm for peace

As much as it's tempting to Monday-morning quarterback now, I think it's dangerously premature. The intent of this post is something I don't think I've ever done before: within my own small reach, I'd like to raise awareness of a couple of things and if possible lower the temperature too.

I have spent the last 2 months trying to figure out where to find the on-line leaders for the various MAGA groups and allies who have concerns about the election. That's included everything from lawyers to MIT statisticians to professional insurance fraud analysts to patent-holding inventors in the field of optical scanning. (I've even tracked down some of the influential QAnon'ers. They're ... interesting ... but that's a story for another day.) I have not heard any of the conservative influencers call for violence; I have heard consistent calls for peace. That includes the lead-up to January 6, where the intended plan of conservatives at the rally was not violence -- and definitely not insurrection -- but to ensure that the legislators listened to the key evidence of election concerns and cheer for their pending proposal of 10 days to audit the vote. The conservative speakers had already worked out who was presenting which evidence, and the big rally was all about being heard. The bad actors -- and they were a mixed bag -- effectively sabotaged the conservatives' last chance pre-certification to break through the news embargo and get their voices heard. The main reaction among the MAGA people that day was both the horror of what happened and the creeping suspicion that the whole thing was orchestrated precisely to silence and discredit the peaceful majority. To be clear, I'm not weighing in on whether anyone else should agree with their assessment; I am saying that is the most common assessment that I've seen from the MAGA people.

Here's a significant risk moving into this week: By deplatforming the peaceful conservative leaders not just once but twice in the last 10 days, the rank-and-file conservatives do not necessarily know where to find their trusted voices, who to the best of my knowledge were unanimously calling for peace. De-platforming the leadership and hounding them from one platform to the next makes the situation that much more dangerous. In the switch from Twitter to Parler, then from Parler to a diaspora of whatever scattered other platforms exist, several key account names have been grabbed by impersonators. To state the obvious: I doubt that all the impostors are benevolent. Not all the impersonated people have been able to get the impersonators shut down yet on the various scattered platforms. There is no guarantee that everyone is aware whether someone is impersonating them on a platform that they never use, but where people may go to see if they can find a voice that they miss. What would happen if a trusted voice is being impersonated by a bad actor who calls for violence? On the off chance that any MAGA people are reading this: If you see a call for violence, consider that someone may be playing you.

Truly, the leading opinion on the MAGA side of the house is that they were played on January 6. I'd give that claim a mixed review in this: Clearly 99+% of the people there were peaceful. Clearly there was no plan at an actual insurrection even from the bad actors, who generally had round-trip tickets or plans to drive back home. And yet there is no doubt that the woman who was shot was MAGA, and was where she should not have been. One of the people in the vicinity at the time she was shot, and apparently from some audio may have been egging her on, was ... well.

By now, you have doubtless been informed that there were no left-wing agitators 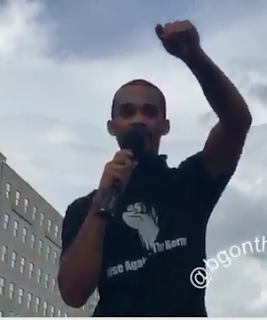 at the capitol impersonating Trump supporters on January 6. 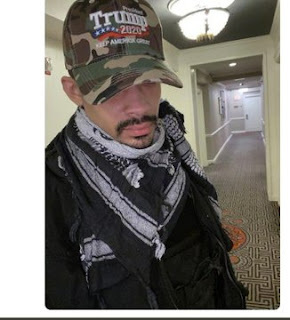 You may have heard that from a very reliable source. 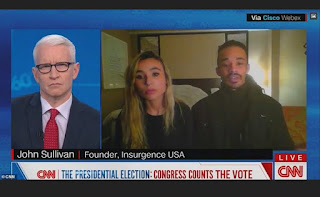 I think it's good to look for ourselves and think for ourselves. It can be informative to see who works well together as a team, making sure a clear and consistent message is heard. At a time like this, it's important not to believe unsubstantiated stories. There's a lot of bad information out there.

Right now, the biggest fear that I'm hearing in the MAGA diaspora is that there will be another false-flag attack (from their point-of-view) on inauguration day, possibly even called for by a hijacked "trusted name" who is being impersonated, and that the next false flag will be a pretext to either rob them of their remaining civil liberties or prevent their evidence from ever seeing the light of day.

It is so, so vital this week that we all keep our heads, and do not let ourselves be provoked into turning on each other. Especially if someone starts trouble. The first way not to start trouble is for everyone to be of goodwill; I don't see that as a good bet right now. The other way to stop trouble is by not piling on.

Lord, make your people instruments of your peace. I hope I'm wrong, but there's a genuine chance that this week is the week where we must raise our voices for peace more insistently and calmly and urgently than ever before.

Posted by Weekend Fisher at 7:25 PM No comments:

Surrealism is not just an art form

At the risk of stating the obvious: The outbreak of violence on January 6 was horrifying and should never have happened. Emotions are far too raw all around for Monday-morning quarterbacking just yet. I'll leave off by repeating my thoughts from November 4, going to sleep when the election was not yet called:

What would it take to delegitimize hatred, dishonesty, and violence? That is our calling regardless of the outcome of the election. If we want a good next four years, it is no longer up to any administration that might be elected. It will take enough of the public to choose honesty and kindness -- not timidly but publicly, to stand firm against those who do not.

Find out what your side is saying about the other that they consider to be ludicrous, outrageous, or demonstrably false.

Right now the political and media leaders are actively making things worse. If they are leading, it is in the wrong direction. As Christians, may we continue to take a firm stand for honesty and kindness, gentleness and respect.

If I could try to add one constructive thought: There is a phenomenon called "coregulation" which is about how, for any group of people who are interacting, moods and attitudes will tend to average out and seek a common ground as people interact with each other. For example, if I get angry and communicate it, you are likely to become angry in return or may have to make some effort in order not to get angry yourself. Or if I am kind, you may find yourself feeling accepted and being kind in return. My actions influence your mood and vice versa, with the ultimate outcome affected by things like number of people, reach of influence, and persistence / perseverance / determination.

That means we have an open path for what we can do to make a difference: If we Christians act in concert, we can be a dampening rod against the hatred, and a point of origin for calmness and reason. We are at such a critical juncture that many of our differences can and (I believe) must be set aside in order to keep things from becoming worse than they already are. If gentleness, civility, love, and respect are to win the day, it's time to raise their banners higher.

My posting time was pre-empted by other things during the holidays this year; this piece is normally posted the last day of the closing year. I'd like to recognize Christian blogs that I read with links to interesting or edifying content found there. I would recommend these posts as exceptionally worthy reads:

In previous years I have taken the time at the end of the year to go back through each blog on my blogroll and find a solid or worthy post to link even if I had not bookmarked one during the course of the year. This year again with my pre-empted schedule the last couple of weeks I have not done that; the links here are simply the ones that I bookmarked over the course of the year. I'm thankful for all the Christian bloggers who serve God and create outposts of wisdom, compassion, insight, holiness, and all the other ways we can serve God.

Posted by Weekend Fisher at 9:59 AM 2 comments: