I think I have come across a way to highlight what happens when different denominations study the Bible. It will be the fourth post out from here -- this being the first -- before the results will be plain. I will try to post more often than once a week while I get this theme developed, as this post and the next two behind it are not difficult to develop. So if I could ask your patience for a few brief posts, I think the point will become clear fairly soon.

This is a word cloud summary of a Bible commentary -- specifically, Luther's commentary on Paul's letter to the Galatians. I found the same on-line version in several places, and it was unfortunately an abridgement. I used the text from Project Gutenberg, with the introductory comments and closing notes omitted. I'd be glad to repeat the exercise with the full text at some point if that is available in English. But for all that, here we can see Luther's emphasis as he discusses the book of Galatians:


Posted by Weekend Fisher at 11:36 PM No comments:

Word Cloud: Formula of Concord (A Lutheran Confession of Faith)

This post is a step in a long-running project of mine to analyze different Christian theologies. The steps will lead towards comparing them not only against each other, but also with the New Testament.


Posted by Weekend Fisher at 1:14 PM No comments:

I have been trying to improve my Venn diagramming skills so that I could get to the point of creating this graphic comparing the New Testament, the Qur'an, the Tao Te Ching, and the Analects of Confucius. I can still imagine a good number of improvements, but it now gets across the basic picture. (Click the image to view a larger version.) 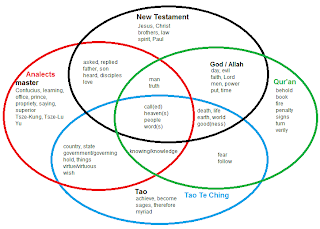 This shows the results of the word clouds / word prevalence studies done previously for the New Testament, the Qur'an, the Tao Te Ching, and the Analects of Confucius. There could be room for improvement in using something more sophisticated than the freeware word cloud tools that were available at the time, in the translations chosen, the methods, and the diagramming skills. Still, first attempts have to start somewhere.

The methods: I started with all the words in each document that were used at more than a certain frequency, percentage-wise. When I began to diagram those I realized it might give something of a false picture to include a word for one document but not another, if a word fell just barely below the inclusion threshhold in the second document. So the final "prominent words" diagram is based on anything above the prominence threshhold in any of the documents, but allows a word to be recognized as important in other documents if it made the list of top 100 words in other documents. I realize that it might be better to expand the diagram to include more words, but frankly my diagramming skills aren't yet ready for the next level of complexity.

The diagram: The most commonly-used word in each document is bolded: God, Allah, Tao, and Master. This decision to bold only one word is an area for improvement. In some documents the most-used word decisively dominates over the other common words, where in other documents this is not the case. For instance, in the New Testament "Jesus" is mentioned very nearly as often as "God". If a word is very prominent in one document, but at the lower end of common words in another document, currently the graph does not show that. So to take this diagram to the next level, the graph needs to give an idea of the relative prevalence of a word in each document.

Interpreting the results: Because of the translation and culture differences,some caution is called for when interpreting the results. For instance, we wouldn't want to assume that the Tao has no interest in "Truth" just because it's in the other bubbles but is not in the Tao's. What if a translation difference would have given "truth" more prominence, or what if "knowledge" has the same place in the Tao that "truth" has in some of the other documents? Likewise with some of the other differences; there are often equivalents.

Choosing the documents: The New Testament and the Qur'an represent the two most widely-believed faiths in the world. Some would say the Old Testament might be included for Christianity; the Hadiths (at least some collections) might be included for Islam. But since I have to start somewhere, I start with these documents and simply make sure that everyone is aware of what is and is not yet included. The other documents -- the Analects and the Tao Te Ching -- are prominent and respected in their own right, but some people might rather have seen other documents chosen for comparison. When making the decisions which to include for this very first diagram, one deciding factor was having a reasonably clear choice of "first texts" to analyze. This made the Analects of Confucius more of a logical starting point than, say, Buddhism, where the question "Which documents to study as the first foundation?" is a far trickier question. To be clear, time permitting in this life, I would hope to expand the study to include more faiths. But my diagramming skills are currently challenged enough for 4, so this will do for today. If anyone is impatient for my progress, I'd invite them to help and diagram other works themselves.

Some real similarities: All four share "call(ed), heaven(s), people, word(s)" -- something that could indicate a shared emphasis on a message to or from or about heaven, for people. However, none of these are the most prominent word in any of the documents. There is less similarity here than we have seen in some earlier diagrams.

Some recognizable groupings: The theistic religions focus on God (see the overlap area between the New Testament and the Qur'an); it's also the only time when two of these documents share the same most common word, if we allow "God" and "Allah" as the same. The Tao and the Analects share a focus on government. The New Testament and the Analects show more of an awareness of personal relationships and interactions: ask and reply, disciples, father and son, and love. The Qur'an and the Tao share common words "fear" and "follow", where "fear" is a prominent word in the Qur'an, and in the top 100 words in the Tao; and where "follow" is prominent in the Tao and in the top 100 words in the Qur'an. (Here is a time where seeing the relative prevalence of the words would show that the Qur'an and the Tao have fairly little in common.)

Some areas of uniqueness: The Tao Te Ching focuses on the Way (Tao) as its single most important concept. The Analects focuses on the master, Confucius, propriety and superiority -- along with some other noteworthy persons besides Confucius. The New Testament has a unique emphasis on Jesus Christ and the spirit, along with Paul, and "brothers" or the concept of brotherhood. The Qur'an has a focus on the concept of a "book" -- something of a stand-in for the idea of revealed religion. It also gives prominence to "penalty" (punishment) and "fire" (hell) in a way that is not found in any of the others. None of these observations will be surprising to anyone who has read the works under consideration.

The grace of our Lord Jesus Christ: Series Index

I know I don't usually post mid-week currently, but I realized I hadn't posted a series index for the grace series I did this summer, and didn't want to have my "once a week" post be only an index to previous posts.

The index has a few observations that I don't think made it into the individual posts.

Posted by Weekend Fisher at 10:02 PM No comments: