"Red Letter" Sections Outside the Bible?

In some Bibles, the sayings of Jesus are highlighted in red, to make them easier to find when scanning the page. It is an easy way to distinguish places where Jesus' sayings are recorded and other material. The reason this is done is fairly obvious but it deserves notice all the same: many people are specifically looking for Jesus' sayings as the point of reading the gospels. The rest is of less interest to them for their own purposes.

The Proto-Evangelium of James is the type of narrative that intends to tell an organized story with a beginning, a middle, and an end. It does this by narrating events and conversations. It mostly concerns itself with the back story of Mary, beginning with Mary's parents before Mary's conception and following through to Mary giving birth to Jesus. While a number of conversations are included in the narrative, Jesus' own words and actions are not part of this narrative. That is intentional given the nature of the document: it does not intend to narrate the life or teachings of Jesus but to provide more material about his mother's side of the family.

The Gospel of Truth does not follow a narrative framework. It is a meditation or reflection, and includes some devotional and inspirational content. There are parts that might be suitable in some Christian circles today in a sermon, as a homiletic reflection on the meaning of the works of the Father, Son, and Holy Spirit, on the fruit of faith, and on our healing as we gain wholeness and forgiveness. It has some allusions to Jesus' words, particularly the lost sheep, along with other Biblical allusions. While there are places in the document that a reader might find a good spiritual reflection, there is no place in the document that a reader might find a quotation of a saying of Jesus. Again, that is intentional given the nature of the document: it does not intend to narrate the life or teachings of Jesus, but to reflect on some spiritual truths.

This post is the beginning of a survey which I intend to continue, giving the reader a better overview of various non-Biblical documents and whether they have any direct bearing on the life and teachings of Jesus.

Posted by Weekend Fisher at 10:09 PM No comments:

Weighing the Gospels: Measurable Differences in Amount of Material, Relative Interest in Jesus

Over the last few posts, we've looked at the most preliminary orientation to the better-known non-Biblical gospels. The first struggle is to determine if the label "gospel" might confuse the picture by creating certain assumptions or expectations about the documents. We're now in a position to give a basic overview of the different texts that we have reviewed so far. First, a general comparison of the lengths of the individual documents, grouped by whether they are Biblical or non-Biblical, then sorted by size: 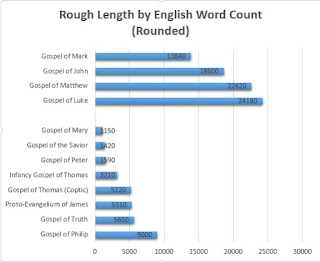 Next, to get a basic assessment of whether each document has an interest in the life or teachings of Jesus, we count how often each document mentions the name "Jesus" to give us a snapshot: 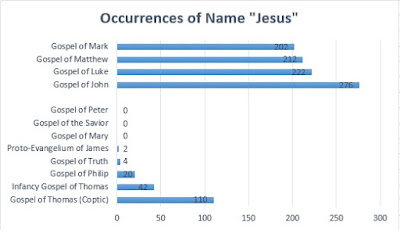 There's a wide variation in how often each document mentions "Jesus", or whether it ever mentions him by name at all.  Some of the non-Biblical documents show interest in Jesus indirectly by way of focusing on his friends or family; some know him as a "Savior" with religious significance but do not focus on a first-century Jew from Nazareth; and some alternative gospels do not show much interest in Jesus either as a person or as a religious concept.

Among the non-Biblical documents in these charts, the Coptic Gospel of Thomas distinguishes itself for having the clearest interest in Jesus outside of the Biblical gospels, estimating by how often his name is mentioned. Though it is not the longest of the documents under consideration, it mentions the name "Jesus" more often than the combined total of the seven other non-Biblical documents that we're reviewing here. By content, it is also unique among the documents as being a collection of sayings attributed to Jesus. The high incidence of the name "Jesus" in such a short document traces to how it contains a series of sentences stating "Jesus said ...".


Update: 02/04/2018: I found that some of the counts had been mis-transcribed by transposing the counts for two of the documents. I have updated the charts and post accordingly.
Posted by Weekend Fisher at 5:12 PM 2 comments:

Resuming a long-term project here, this post continues a presentation of objective, computerized statistical analysis of all the various documents that are called gospels, both those that are in the Bible and those that are not.

In the previous post, we'd looked at several documents that are often classified as Gnostic gospels, and another that is sometimes nominated for the category of Gnostic gospel. In this post, we continue with another collection of that are popularly referred to as gospels, though not as Gnostic ones.

Again, the first task is to take the expectations that come with the word "gospel" and see if those expectations actually apply to these other documents. We're starting with a simple orientation to the relative size of the documents, and using English as a "rough analysis" basis for word-counts in a common language. As a point of comparison, the Biblical gospels run in length from the shortest as the Gospel of Mark at around 13840 words, to the longest as the Gospel of Luke at around 24180 words.

The relative lengths of the non-canonical documents here, in round numbers are:
The four of these together are shorter than the Gospel of Mark alone. The longest of these, the Proto-Evangelium of James, is less than 40% of the length of the shortest Biblical gospel; it is mainly concerned with the events in the lives of Jesus' grandparents and parents leading up to his birth.

In the next installment I plan to look at another introductory question, the relative focus on Jesus, in both the Biblical and non-Biblical gospels. This will put us in a better position to have an overview of the documents in general.
Posted by Weekend Fisher at 2:35 PM No comments:

This post resumes a project that I had set aside and have always intended to continue: an objective, computerized statistical analysis of all the various documents that are called gospels, both those that are in the Bible and those that are not.

I had previously posted word clouds as an overview of several alternative gospels that are (or some contend might be) classified as Gnostic. This type of introduction is important because the word "gospel" may cause certain expectations for those familiar with the four Biblical gospels. In the Biblical gospels, the focus on Jesus' life and teachings results in documents where the most commonly-used word is "Jesus" in each of the four. That expectation of the word "gospel" may not apply to all of the alternative gospels, which do not always share that same focus on Jesus. I've included the most commonly-used word here for each of the Gnostic gospels, with links to more complete word clouds for those interested.
For reference, there is also a Venn diagram of their major areas of focus showing the top 10 words used in each of those gospels. "Jesus" is included as the most common word for the Gospel of Thomas, but does not make the top 10 words for any of the other Gnostic documents covered here. It is important for those familiar with the Biblical gospels that we do not not carry forward too many assumptions about the content of the alternative gospels simply from the fact many scholars refer to them as gospels.

One important item lacking so far is any indication of their size. For instance, in the Biblical gospels, Luke is the longest (the NIV text that I used had around 24180 words) and Mark is the shortest (around 13840 words), by word count.

How much material is in the Gnostic gospels? This type of overview is important again as a perspective-check for people who are used to the word "gospel" referring to the canonical gospels, and so carry over some expectations to the alternative gospels, to find that those expectations may not apply.
The Gnostic gospels are relatively shorter than the Biblical gospels. They range from the longest (the Gospel of Philip, where "Jesus" is not among the top 10 most common words) at about 2/3 the length of the Gospel of Mark, to the shortest (the Gospel of Mary) at less than 1/10 the length of the Gospel of Mark.

I hope to continue this series with other, non-Gnostic gospels in an upcoming post


Technical notes: This initial comparison has been done using English texts for the word counts. Since the various documents are in different original languages, if we want to compare word counts at all then the comparison has to be in a common language, otherwise the different meaning-density of the languages would skew the results. So English will work as a common-denominator language for an initial survey of relative lengths. For the sake of the word counts, I did not include things that were not part of the original document's text such as introductory remarks, concluding remarks, chapter headings, or parenthetical references to other documents. I also excluded thing that were not actual words such as verse numbers or the standalone punctuation mark " - ". I did keep any ellipsis marks ("...") as part of the text for word counts, on the hopes that the translators were accurate there and it did stand for one or more words in a damaged ancient manuscript.) The results are rounded to the nearest 10 words.

Update: 02/04/2018: I found that some of the counts had been mis-transcribed here, and have updated accordingly.
Posted by Weekend Fisher at 2:55 PM No comments: