God's Law: what to make of condemnation

The Law of God has a power that we naturally dread: the power to condemn sin -- that is, our own sin. The law sets itself at enmity with evil and condemns it to destruction; it sets itself against impurity and decrees that it must be made clean again; it wages war on injustice. Our impure hearts have a very natural reaction to this: to pretend we are clean already, then pick up the law to use as a weapon to attack and destroy our own personal enemies. We have what it takes to hate sin in others, but rarely in ourselves. The natural temptation is to an immoral use of morality. The follower of Christ is called to a far more challenging use of the law.

The follower of Christ is called to take up the Law against the evil in his own heart. In our times it has been common for "condemnation", because of its abuse, to be considered always too harsh; after all, doesn't Christ pardon our sins? But the pardon of our sins is found in the cross, which is not the message of those who would take sin lightly. The message of the cross does not excuse sin, but condemns it. At the cross we find forgiveness, but only at the price of condemnation rather than excuses. Part of taking up our own cross must be a willingness to condemn that evil within us which belongs on a cross. Part of joining with Christ's death must be condemning the evil within us to die on the cross with Christ. "For we know that our old self was crucified with him so that the body of sin might be done away with, that we should no longer be slaves to sin." (Romans 6:6)

The condemnation of the law calls for our destruction. At the cross of Christ, we take up that call against ourselves, condemning our own sinfulness not in despair or in self-hatred -- for that would be still holding onto the sin as if it were still our own. Instead, we dare to hate our own sin and disown it, as Christ takes away the filth and shame. We dare to nail our sins to the cross and condemn them to die; we dare turn to Christ and in his death find ourselves set free. For we have in our better times hated the corruption within our own souls, and we have been given a weapon against that evil: the condemnation of the law against it. This condemnation, directed at ourselves now rather than our enemies, and recognizing the true enemy as sin, drives us to the cross of Christ. The law empowers us to stand firm against evil on the most treacherous ground of all, our own souls. The cross gives us the courage to condemn the evil inside us to death. It fulfills the promise spoken long ago in the Psalm, "the sacrifices of God are a broken spirit, a broken and contrite heart, O God, you will not despise."

Only God's profound faithfulness in forgiving sins and cleansing us from all unrighteousness gives us the freedom to be truthful about our own sins. For our souls will come only when we see that God is trustworthy. At the cross we have the freedom to recognize that we have been slaves to sin -- because there we find freedom in Christ.
Posted by Weekend Fisher at 8:42 PM 2 comments:

I appreciate the patience of those who waited through various analytical posts. My next few are in a more edifying vein. The next several posts consider different aspects of God's Law. Each post in this series contains a partial picture and therefore an incomplete picture. It still seems best to me to consider these aspects separately. If you read this post and think, "That's only part of the story" -- you're right.


In the beginning God's creative power worked through his word, and ten times in the first chapter of Genesis we see "God said" followed by a decree that created reality and blessed the world. In the next book, Exodus, once again we see ten decrees coming from the mouth God. While much has been said about the ten commandments, I want to look first at how they are words of creation and blessing.

The commandments of God are creative: they call and create a people of his own, binding him to them and them to him. They call us to be co-creators with God of the reality around us, a reality that could, as in the beginning, be called good. The commandments carry the blessing of God in that keeping them makes us channels of God's blessing in the world, blessings such as peace and rest and homes where we are welcome. A people that takes these to heart would be blessed intrinsically by the very fact of having these commandments in their hearts and the actions that would necessarily follow.

I think something like that inspired two of my favorite psalms, Psalm 19 and Psalm 119, both praising the law of God for its beauty, its goodness, and its ability to bless.
Posted by Weekend Fisher at 10:49 PM 2 comments:

Gnostic Gospels and Canonical Gospels: An Assessment of Jewish Context 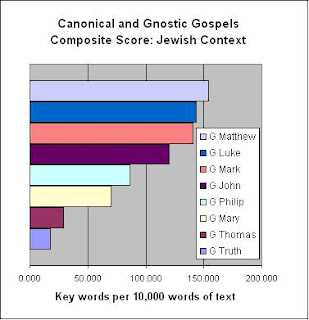 As I mentioned when reviewing the canonical gospels for Jewish background, an obvious thing runs the risk of being overlooked or undervalued. The canonical gospels, on a basic level, are Jewish documents: they assume Jewish background, religious concepts, and culture. The Gnostic gospels, on that basic level, are far less Jewish.

At times, the Gnostic gospels bring up a Jewish concept only to disagree with it as already seen in the review of the Gospel of Mary. The Gospel of Philip discusses Jewish Temple sacrifices in a way that makes it highly unlikely that the author(s) had ever personally been to the Temple in Jerusalem while it was still standing. The specific handling of Jewish concept-words in the Gnostic gospels does not always reflect familiarity with and acceptance of a Jewish context, but at times instead reflects unfamiliarity with or disagreement with those same Jewish concepts. The Gospel of Philip has some interesting features in its appropriation of Jewish words and concepts which will be discussed in a separate post.

A note on which gospels were included here as Gnostic gospels: I am aware there is some discussion about which gospels qualify as Gnostic, and again some discussion about whether "Gnostic" is an entirely useful category. I have included the Gospel of Thomas in this discussion about Gnostics even though there is still some question whether it truly belongs with the Gnostics, still there is enough possibility that it belongs here that I will include it here. I have not included the Gospel of Judas even though I am sure it belongs, but the ongoing controversies about the correct translation have made me prefer to delay this type of review until the vital translation controversies are better settled.
Posted by Weekend Fisher at 6:23 PM 2 comments:

Text: The Gnostic Society Library
Posted by Weekend Fisher at 2:00 PM No comments:

Text: The Gnostic Society Library
Posted by Weekend Fisher at 1:30 PM No comments:

When a thing is obvious, it risks being overlooked or undervalued. One of the most obvious things about the New Testament documents is that they are set against a Jewish background. Jesus is seen in a Jewish context. He uses the specifically Jewish law of Moses as a springboard for speaking of universal concerns such as the love of enemies. He also speaks of specifically Jewish concerns like the Passover. There is a backdrop of history behind his actions: each of the four canonical gospels speaks of Abraham, of Jacob, of Moses, of David, of the prophets. Each mentions Isaiah by name, and mentions the Feast of Passover. They all mention the Pharisees, the Temple, priests and the high priest. They all mention Israel and Judea and specifically Jerusalem. They all mention the Sabbath, the synagogue, and the law. Other concepts with a strong Jewish history often find their way into the conversation as well, such as commandments, sin, being unclean, sacrifice, blood, and offerings. The accompanying chart shows, for each of the canonical gospels of the life of Christ, how often such Jewish context words occur for each 10,000 words of text. Admittedly this is a crude measure; a more thorough measure would take into account not only items such as word frequency, but entire sections reflecting Jewish concerns -- such as the genealogies in Matthew and Luke. Still, the word frequency scores are useful as a quick snapshot of the Jewish background assumed by the texts.

It is probably no surprise that the Gospel of Matthew has the highest score for Jewish context and concepts, nor the Gospel of John the lowest. The Gospel of Matthew was written for a Jewish audience, and by early accounts was originally written not in Greek but in the Hebrew language (which in that era may have meant Aramaic). The gospels of Mark and Luke score so closely together for Jewish context that the difference between them is probably not statistically meaningful. The Gospel of John was written, by early accounts, slightly later in the early days of the church. The Jewish context scores for John, while still significant, are noticeably lower than the others, and it has long been noted that this last of the four canonical gospels sometimes stops to explain Jewish concepts to an audience that may not understand them. This reflects a shift in the history of the Christian movement from a primarily Jewish group in its early days to an increasingly Gentile group as time progressed. For this latest of the canonical gospels, there is still a strong Jewish context, but at a lower level of saturation than the earlier canonical gospels.
Posted by Weekend Fisher at 9:36 AM 3 comments: