The New Testament and the Qur'an: Mathematical Comparison

We have already looked at some of the New Testament texts in comparison to texts outside the Bible, including texts of other religions. Here we take a look at the New Testament as a whole, compared to the Qur'an as a whole. As a reminder, this is not a comparison at the subjective level, but a mathematical comparison of how often different words are used in the texts. So you come across issues like translations, and whether the same words (even if we allow across languages that they are the same words) really mean quite the same thing in two different cultures. Still, for a person who wants an idea how two things are alike and different, it is a place to begin.

The New Testament has a shared emphasis with the Qur'an of about 35%.

Much of the overlap is due to the shared monotheism: "God" is the single most prevalent word in both texts, if we allow "God" and "Allah" to be considered a shared match, and if possessives (God's, Allah's) are included in that count. "Lord" is also common in both texts. The overlap also includes the involvement of God with people through his word or message, as shown in the common use of "man, people, men, faith, called, truth, earth, good, life" in both texts. Both texts keep in mind the matter of time and eternity, with both texts having "day" and "heaven" as common words (if we posit that "heavens" in the Qur'an translation used matches "heaven" in the New Testament translation used).

The Differences: New Testament keywords not emphasized in the Qur'an

The New Testament also has more emphasis on individual people and their history, as the common words include the word "disciples" and the names Paul, Peter, and John. The New Testament has more emphasis on the setting of Jesus and his followers, with "Jews" and "Jerusalem" among the common words. It looks to its Jewish religious setting with much discussion of the role of "law". While we saw the Qur'an along with the New Testament has a prominent place for the word "life", the New Testament also contains "dead" and "death" -- which come up in several instances, whether Jesus raising people from the dead, or God raising Jesus from the dead, or the New Testament teaching that Jesus' people are joined to him in death and therefore also in God's favor and resurrection. I hope to present the differences in chart form soon, rather than turn this discussion into a catalog, where a table or graph is a more suitable presentation for some material.

The Differences: Qur'an keywords not emphasized in the New Testament

From the Qur'an's point of view, the New Testament lacks the emphasis on judgment, hell, and the last day that are so prevalent in the Qur'an, where we have a whole series of common words that are not emphasized in the New Testament. "Fear, evil, penalty, fire, reject, unbelievers, reward, judgment, punishment" each have their own emphasis as keywords in the Qur'an. The persistent focus on hell and punishment is something that has caused comment among Christians who read the Qur'an, and again is confirmed as an objectively real difference by the relative word emphasis.

The Qur'an at time considers the role of other monotheists -- and their writings -- in its common references to "Moses" and "book". It also does have some emphasis on "mercy" -- while less prominent than the New Testament's emphasis on "love", it may be comparable in some ways. The Qur'an's view of "guidance" may also apply here. Again, I hope to present the word comparisons in chart form soon, since a table or graph is a more suitable presentation for some material.

This year for Lent, I have had to take into account that my schedule has changed a lot since last year. (Those of you who notice when I update the blog will have seen this by now. I have less free time now in the average day than I did a year ago, less than I've had for the last however many years running.) So I struggled a little to find a Lenten observance this year that was practical within that schedule.

This year is a small observance: I am singing Lenten hymns in the shower. (The acoustics make my voice sound better anyhow.)

Why in the world would I mention such a small observance? Just in case anybody else has a year with a rough schedule. Lenten hymns or spiritual songs could fit into a morning shower, or rush time karaoke, or could be on an iPod. It may be a small step, but it is a step. There's always something.

Again, there were some obstacles in getting this word cloud:

Still, we're far enough along that the major texts of a few religions can be compared in a Venn diagram. I'll save that for another post since I'm trying to get a more detailed diagram that will show more than just the top 10 words.

Posted by Weekend Fisher at 7:21 AM No comments:

There were some unexpected obstacles in getting this word cloud.
To sum up, it took more hands-on involvement than was ideal before I had results that were reasonably clean, and still there were some specific items that might need a second look. These results should be considered a rough estimate until such issues are researched more completely.

Posted by Weekend Fisher at 10:20 PM No comments:

Picture this: What some "alternative" gospels have in common 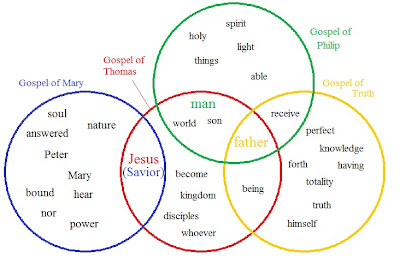 As basic as my Venn diagramming skills are, I will not try to represent more than four things at a time quite yet. There are more "alternative" gospels than these four, but I have limited myself to these for right now. Here are the reasons why I started with these:

To compare this diagram to the previous one, we can immediately see that these alternative gospels are not as tightly related to each other as the Biblical gospels. We see that in an objective, measurable way: they do not all share a core set of keywords, or share the same most common word.

Again, comparing the alternative gospels to the Biblical gospels, "Jesus" does not have as much of a place here as in the Biblical accounts. In some alternative gospels, "Jesus" (or a title like "Savior" to represent him) isn't one of the top ten keywords. For example, in the Gospel of Philip and the Gospel of Truth, "Jesus" is not represented in the top ten words, being relatively less important in those documents than other keywords or concepts. This is in contrast to the Biblical gospels where "Jesus" is the highest-frequency keyword -- the topic of first importance -- in all four.

It is questionable whether "Gospel" is an accurate thing to call those particular documents that make no attempt to relate the life or teachings of Jesus, and where "Jesus" does not appear prominently in the top keywords. If a gospel is something that has -- or claims to have -- some record of the life and teachings of Jesus from a viewpoint of his early followers, then some of these documents simply don't meet that definition. Neither is it any complaint against certain documents to mention they do not meet that definition; they simply were not written with the purpose of recording the life and teachings of Jesus. (I've mentioned before, "unorthodox patristics" may be a more accurate classification for some of these documents.) Bear in mind that we are measuring the emphasis of all the documents in an objective way; the result is not something that depends on any ideology, belief, or lack of belief. We are not measuring things one way for the Biblical documents and another way for the non-Biblical documents: we have a level playing field, and all documents are handled in the same way. When we handle the documents the same way, we find there are some differences in what they contain. We are letting each document's contents set its own keywords, and measuring how often those keywords are used. Anyone would get the same results regardless of their views on the documents in question. It is not some sort of ideological thing to notice that some documents are mainly about Jesus while others are not; it is a matter of objective fact. Calling these other documents "gospels" may generate publicity, but it is done at the expense of accuracy about what they actually contain.