The most important things for us to support this election

In a normal presidential election year, I save an election post for election day. This election year is so unusual that I thought it might be better to say this before things get any more interesting than they already are. The most important things for us to support would not be Flawed Candidate R (rude, crude, and lewd) or Flawed Candidate D (so dishonest and corrupt that even long-time political insiders express shock repeatedly; for the full story see WikiLeaks). It's unfortunate that the alternative parties didn't nominate anyone particularly qualified; this could have been their opportunity.

From a purely political viewpoint, I think the most important things for us to support this election are:

I've added a few comments, though most of these verses are presented without comment.

Shame has different elements, from feeling dirty or exposed, abandoned, and disowned, to a loss of confidence about being accepted or valued, to the fear of rejection and being alone. The Bible speaks to these:

Posted by Weekend Fisher at 9:56 PM No comments:

Follow-Up: A Well-Loved Pitcher and Glasses 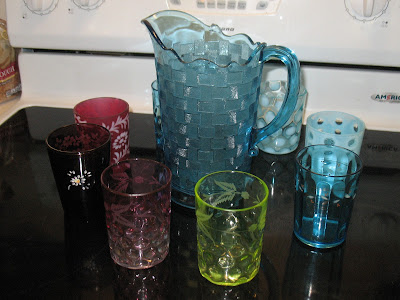 Posted by Weekend Fisher at 1:06 PM No comments:

P: If we confess our sins, God is faithful and just to forgive us and cleanse us from all unrighteousness.

C: Create in me a clean heart, O God.

Create in me a clean heart, O God, and renew a right spirit within me.

P: Blessed are the pure in heart, for they shall see God.

Guilt and Shame: Where religion and psychology meet

I've mentioned before that I've been participating in a Twelve-Step group for people whose parents were addicts. It has come as a surprise to me that shame plays such a key role for children of addicts. Without breaking any confidences, I think it's safe to say that shame is a typical struggle for people who were raised in a dysfunctional home. The varieties of shame, and the fact that it's such a common experience, are beyond anything that I'd have suspected. There is shame over being unwanted / unimportant, shame over things that were said or done to us, shame over the government taking an interest in the parenting in that home, over problems in school, over being hungry or badly dressed or having lice or having the utilities cut off or being from "that home" with the police car flashing its lights outside (again). It's about having so many experiences that can't be repeated in polite company.

Keep in mind that shame is an entirely different thing than guilt. It's easy for someone to offer as consolation:  "It wasn't your fault." True enough, and that would help if the problem were guilt; but that's not the point when the problem is shame. I'll put it like this: almost a year and a half ago, my mom said I could take some of my grandmother's things - a pitcher and some glasses -- from her home over to mine. I could see the potential in the pitcher and one of the glasses, but I wasn't sure I wanted the rest of them. They were filthy. I couldn't imagine ever drinking from them. They were so filthy that I was unwilling to put them in the dishwasher with other plates and glasses, since I didn't think that the dishwasher could manage that level of dirt. I filled the sink with hot water and soaked them, and washed them by hand. After the first wash they were still dripping dirt and the water was too dirty to clean them further. So I emptied the old water and did it again. After the second wash, they were still dripping a little bit cloudy when the second batch of water became too dirty to get them any cleaner. After the third wash, I was willing to put them in the dishwasher. Now that they are clean, I can see that they are actually beautiful. But in their original state, they were beyond ordinary "dirt" issues. They needed a lot of work before they were up to an ordinary level of mess, where they could go in the dishwasher. In that home, the levels of neglect are so profound that anything coming out of there will need remedial work. So at the end of the story: On a human level, shame is when you are so dirty that you can't even go in the dishwasher with the good dishes.