"Let us not become weary of doing good"

I find it very easy to get tired of things that are repetitive. Laundry. Certain tasks at work. Being civil to people who are routinely rude.

I wouldn't stop doing laundry, though: I recognize its necessity. I wouldn't stop doing tasks that irk at work: I intend to keep the job for awhile yet. But keeping a civil tongue toward those who are rude -- it's easy not to see the necessity. It's easy to get tired of it, especially when it's frustrating or I don't see any useful result. (Though I think "not seeing a result" may be part of the point: if I repaid someone else's unkindness with more unkindness, I think I would see a result: a negative result.)

"Let us sow to please the Spirit. ... Let us not become weary of doing good. ... Let us do good to all people as we have opportunity." What does kindness look like today? It may look like sidewalk chalk art. It may look like hosting an online get-together (or attending one), or making a phone call. Most people that I talk to these days are hungry for a human connection amid all the isolation. Because the church is built of living stones. The body of Christ is made of people.

I am grateful for the online platforms that allow me to stay connected.
Posted by Weekend Fisher at 6:56 PM 2 comments:

I've held off on posting this during the solemn season of Lent. Now that we have entered the festive season of the resurrection it's a more fitting time. This discusses the sitcom/drama The Good Place, and contrasts it with what Christians would consider to be the good news. For those not familiar with the show, the premise is that several people find themselves in the afterlife where their host informs them that they have died, this is the afterlife, and they are now in "the good place".

The Good Place reflects the socially acceptable agnostic spirituality of our times. Without spoiling the various plot twists of the series, we'll just say that "the good place" is not necessarily as good as anyone might hope. After some time the focus of the series pivots to the question: If we were to create our own afterlife, what would we want it to be? In one man's vision of what the afterlife should be, we would choose to perfect ourselves -- perfect our skills, complete our bucket lists, attain self-fulfillment or enlightenment -- then let go of our existence and return our energy to the cosmos. Every story must end; this one ended with an embrace of a return to non-existence.

The show had some good moments, some fun plot twists, and some endearing characters. What it didn't have was a belief that life is intrinsically good and that a love of life would endure. In some scenes, the afterlife was an endless party that had overstayed its welcome. The show's last reconstruction of the afterlife was one in which people pursued pet projects and self-actualization. In that vision of the afterlife love was not forever. The residents, either self-absorbed or isolated, eventually saw that there was nothing more for them, and left. In some cases, they left others grieving; it was not a place where there was no more mourning or death. There was little to distinguish the afterlife from this life except greater power (or accommodation from the existing powers) and more time.

The good news paints a different picture, and I will note some of the differences that struck me most clearly. The good news pictures our own creator who loves us dearly welcoming us to a place he has prepared for us. The good news pictures love and beauty that do not fade or wear thin in our renewed hearts and minds. In the good news, we are no longer world-weary. Our relationships are no longer strained, our souls are no longer stained. Fear of death and of loss are gone. Instead of "the good place" with its escalating series of entertainments or achievements that at some point can no longer be topped, the good news gives us a river that restores our soul, and the warmth and connection that make life desirable.

People willingly step out of "the good place" because it's not the kingdom of God; it's just an epilogue where people can fix their lives and characters if they choose. But the kingdom of heaven is like a wedding feast. Or like baking bread. Or like going fishing. Or like a family that is finally re-united with a long-lost son.

I may be celebrating virtually, but this year's celebration of the resurrection is particularly sweet. As we've all spent Lent mindful of our own mortality -- whether we intended to spend it that way or not -- this year I can more easily see just how that is the one victory that matters: the victory over death. Without that, any other victory is short-lived.

He is risen indeed! Alleluia!
Posted by Weekend Fisher at 3:55 PM 2 comments:

Palm Sunday - The Victory Not Yet Seen

Of all Christian holy days, Palm Sunday has a distinctive emotional note: the triumph celebrated before the battle, with the people anticipating a very different battle than what was fought on Good Friday. When the time came, Good Friday looked like an irretrievable defeat. Only the later event of Jesus' resurrection revealed it as the most enduring victory of the ages.

The people expected a different battle, a worldly battle that they saw as a proxy for the spiritual one. The week definitely brought worldly political maneuvering: betrayals, in-fighting, favor-trading, posturing, even a CYA move by Pontius Pilate that still couldn't quite hide the fact that everyone's hands were dirty. Even among the "leaders of the light", the battle lines ran down the middle of the human heart. The fight that mattered saw Judas betraying, Mark (as tradition has it) fleeing, Peter talking a good game when he was safe but then before the night was done weeping in shame. Even the best of us aren't saviors. As far as the political fight, God had other plans. He was accomplishing a far larger victory than they had imagined.

Jesus' death looked like an irreversible defeat. Isn't death the ultimate irreversible defeat? By Friday night, the original Palm Sunday parade might have looked like nothing but a farce. The victory was not yet seen; the defeat seemed the obvious thing. The disciples were behind locked doors, hiding in fear.

We can find ourselves in a similar situation: where by outward appearances faith is foolish, celebration either naive or in bad taste. Palm Sunday leaves me with just one question this year: do we trust in the victory not yet seen? In some ways, Palm Sunday is the day that is most like where we are in the sweep of history: we have seen the savior, and we celebrate his coming even if we treasure our own personal interpretations of his agenda. But God's plans never take the easy way, and accomplish a larger victory than we image.

Are we willing to celebrate the victory not yet seen? Here's to a foretaste of the feast to come.
Posted by Weekend Fisher at 9:55 PM 2 comments:

For those trying to balance between flu safety and staying active, the first model of the Ambulatory Protective Room (APR-1) is now available. 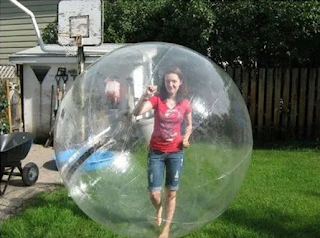 To introduce it to the market, the manufacturer is sponsoring a contest in which participants cross a park and local creek in the mobile exercise gym. The main competition is for the fastest completion of the course:

There is an additional side contest of gymnastics, scored based on number of cartwheels while completing the course. Only registered, intentional gymnasts are eligible for the gymnastics prize.

Posted by Weekend Fisher at 7:10 AM No comments:

In the current telemarketing environment, still having a land-line can be a liability. Fraudulent calls may now comprise a larger share of network traffic than even relatively-legitimate marketing campaigns. One enterprising consumer-protection bureau has devised a defense: their new scam prevention service provides answering-machine recordings specially designed to filter out spam-and-scam calls.

"Up until recently, our most popular download has been the out-of-service tone. When an automated call hears that tone on your answering machine's message, it disconnects," said Paul Smisher, a spokesman for the service. "Just incorporate the sound into your recording and robocalls disappear." Since appointment-reminders are also caught up in the robocall purge, the former hot download has now been replaced. "The current favorite is a message which makes most human scammers hang up in search of less-aware targets. Our customer reviews are full of stories of how gratifying it is to hear the aspiring fraudsters hang up while listening to the recording." The new leader for first-line defense is now the following recording:

These and more messages are available from Anti-Phishing Recordings 1 (APR-1).

This post was scheduled long before the current virus threat. I figured people could still use a break in the tension.
Posted by Weekend Fisher at 7:00 AM No comments: