Palm Sunday does not last - so why celebrate it?

On Palm Sunday we celebrate Jesus' triumphal entry into Jerusalem. We may even participate in the celebration of those crowds by bringing palm branches to celebrate in the same way that they did. And the sermons of the week generally focus on how fickle the crowds, how clueless the crowds, how we are no different ourselves. True enough, but consider this:

We were celebrating the right person at the wrong time. We were celebrating the triumph we hoped for -- which seemed like the world to us -- without recognizing how small it was in scope compared to the real one. God has better planned than we have imagined; that does not make it wrong to celebrate. It's a foretaste of the feast to come. Then we did it blindly, destined to be confused and disappointed. Now we do it knowingly. If we celebrated a small triumph, unknowing, how much more should we celebrate a greater triumph. If that first celebration faded, the next one will continue. It is right to celebrate. It is advent all over again, in the sense of celebrating the one who is coming.

Blessed is he who comes in the name of the Lord!

Why I can find grudges appealing (not advocating them, but being honest about them)

Since Lent is the season of repentance, I'll own one of my struggles: I know how to carry a grudge. As I try to put down certain grudges, I am learning an uncomfortable thing: I am carrying certain grudges because I don't want to let go of them. In some cases there was irreparable harm done to someone, whether myself or others close to me. Letting go of that kind of grudge seems like letting go of the fact that the "bad guys" got away with it. Isn't it easier to forgive the villain if the villain has been caught and humbled? I do not have the same reaction to a villain who is successfully masquerading as an angel of light.

If the reader has no comparable experiences, consider the famous grudge pursued by the movie character Inigo Montoya from The Princess Bride. He watched someone kill his father; he was too little to do anything about it. His grudge was based on the certainty that his father was worth avenging, that killing his father was wrong, that wrong deserved to be challenged and stopped. In some of the grudges I struggle with, I have not yet found how to let go of the grudge while holding onto the certainty that wrong deserves to be challenged and stopped.

Not all of my grudges are about irreparable harm. I also find it hard to release a grudge if I expect the wrong will happen again, or if the wrong was intentional, for example if there was spite involved.

In different ways, the same point comes up: some grudges feel like unfinished business: like the work that comes before forgiveness is not complete. For now, the best I have found is to notice the common threads, and give voice to what needs saying. I'll stick with the fictional example and name what is true for the people involved: Inigo's father did not deserve to die; he deserved better. The person who killed him did wrong, deserved to be ashamed of his actions, and deserved to be held accountable for his actions. I wonder, how much is that groundwork part of the distinction between being forgiven and getting away with it. What of Inigo; did he deserve the obligation of righting that wrong? Is it a bad or good thing to have that obligation?

Prayer: Lord, grant me discernment to forgive truly, to speak honestly, to set aside any mere resentment or bitterness, and to do unto others as I would have them do toward me.

The Value of Meditation

"Consider the lilies of the field." -- Jesus 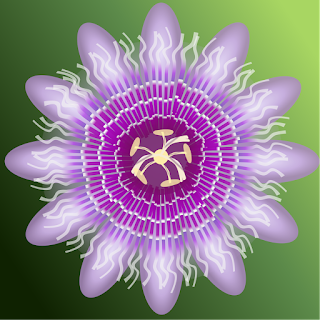 It is roughly a year ago now that the pandemic gained enough traction to affect daily life. I still remember shortages of all kinds of food, shortages of tissues and toilet paper, even a week or two where the store had no milk -- until people figured that it made no sense to panic-buy something so perishable. Much of what happened at this time last year was driven by fear or its marathon-running cousin anxiety.

I found it was not the scarcity that made the days seem bleak so much as the long-running anxiety and confinement. I find not just wisdom but also healing in Jesus' instruction to consider the lilies of the field. The flower in the nearby drawing is called a passionflower or a maypop. As a rookie artist, this is the first time I have been able to do justice to a passionflower, though hardly the first time I have tried. "Not even Solomon in all his splendor" could match the beauty of the wild. It helps me to consider that the most valuable things in life do not come from prosperity or safety. Creation has mesmerizing beauties. The good shepherd leads us; this is one of those green pastures. He restores my soul.

That is the value of meditation. May I consider it as essential as sleep.

The Sheep and the Goats: The Hero of the Parable

I've gained some insights by looking at Jesus' parables through the lens of popular story-telling. If a story is "A hero's struggle against an obstacle to reach a goal," what do we make of the parable of the Sheep and the Goats? I'm aware that there's an argument to be made that the Sheep and the Goats isn't a parable but a passing simile in an otherwise real-world account of the future; regardless it's still a narrative where the same analysis can be worthwhile.

We could look at the judge, the Son of Man, as the hero. His actions have the grandest scope available: He comes to inaugurate that blessed kingdom, to resolve all of human history, to provide the final answer for the life of each person who has lived, and ultimately to begin the Last Day when history reaches the goal that has been planned since the world began.

And yet as we read or hear Jesus' teaching we are listening for our own names to be called, our own fates to be decided. The way Jesus presents it, it's not just his story but the fulfillment of all of our own stories as well. Jesus directs us to focus back on our daily lives: what kind of life have we lived? If we analyze our lives as a story, were we the "hero"? And here the story analysis needs a check: the traditional "hero" may be someone who is focused on his own life, his own goals, his own victories and his own excellence. Our hero may have an impressive list of achievements, may have attained a certain status or recognition.

These traditional hero goals are not the kinds of actions which Jesus recognizes. "I was hungry and you fed me, thirsty and you gave me a drink. I was a stranger and you welcomed me, naked and you clothed me. I was sick and you visited me, in prison and you came to me." In a story, we want to know what motivates a person, gives them the tenacity to pursue their goal, or even chooses their goal for them? For all the actions here, it's compassion, it's mercy, it's love. The only true "super-power" that is recognized in this story is love.

A question about fasting and Lent

The other day someone asked me about Lent: If a person gives up something for Lent, is it ok to substitute something else to make that easier? It's an interesting question so I thought I'd check around for peoples' thoughts here.

Off the top of my head, my own thoughts were:

I would be interested to hear other peoples' thoughts on that.

Posted by Weekend Fisher at 7:03 PM No comments: